This celery root, fennel, and apple salad with Manchego cheese and sunflower seeds is tossed with a slightly sweet, tangy dressing made with lemon juice, apple cider vinegar, honey, salt, and extra virgin olive oil. It is a simple side or light meal that epitomizes how a handful of ingredients, in their natural state, can combine to be more than the sum of its parts.

Have you ever tried celery root? It has a mild celery flavor with a crunchy, radish-like texture. It can be eaten cooked, where it becomes more mild and sweet, or raw, as it is used here, where it has a stronger celery flavor and crisp texture. Fennel is a contentious ingredient, but combined with the other ingredients here it’s licorice notes are somewhat muted but are also such a perfect compliment to all the flavors going on. Apple brings sweetness and tartness. Everything has a crisp texture, they are similar but slightly unique, so it is has an interesting chew

Manchego is an aged sheep’s milk cheese. When aged, it has a mild, nutty flavor with just a hint of funk from the sheeps milk. It is quite delicate as to not overpower the veg and apples, but provides creamy and umami notes that really set the slaw off. Sunflower seeds have a strong nutty taste and crunchy texture and add the most savory notes to the salad. The lemon and apple cider vinegar add sweetness and acidity, with just a bit of honey to take the edge off. So refreshing!

Note: The ingredients will release water as they sit. Before serving, taste and add more dressing using the same ratio, as needed. 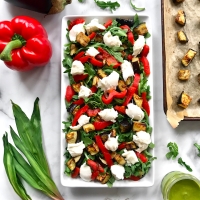