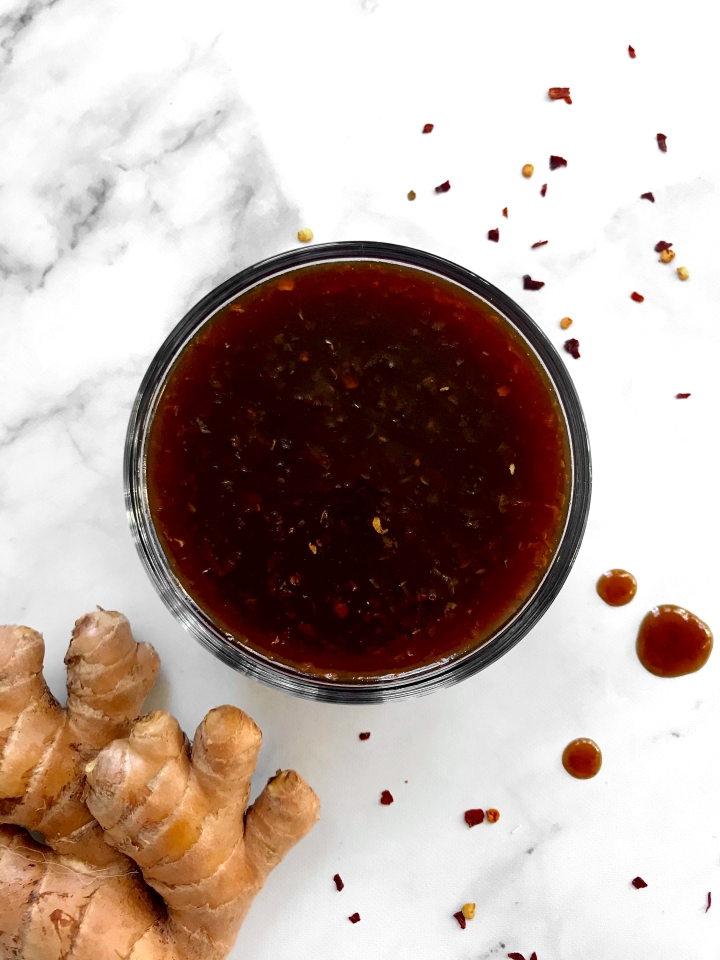 This bold teriyaki sauce is so easy to make and so delicious! By using less sugar than your typical teriyaki sauce, the flavor of the ginger, garlic, and sesame oil really shine through. Adding just a bit of fish sauce, five spice, black pepper, and red pepper flakes give this sauce a lot of dimension and depth. Using coconut aminos in place of soy sauce lends much less sodium without sacrificing any flavor.

Where does Teriyaki Sauce come from?

Teriyaki is actually a traditional cooking method from Japan in which meat or seafood is cooked in a sauce made with mirin (sweet cooking wine), soy sauce, sugar, sake, and sometimes ginger. In the US, Teriyaki became popular in the 1960’s along with Japanese cuisine. What we in the Western world largely know as ‘Teriyaki’ is a sauce resembling the flavors in true Japanese Teriyaki.

Read more on the history of Teriyaki here.

This bold Teriyaki sauce is not authentic and is closer to the Teriyaki-style sauces found in the US. While I have made Teriyaki with both Mirin and Sake, this version uses neither to make it easier to throw together with things you may already have on hand. I love using coconut aminos in Teriyaki sauce because it has an inherent seasoned flavor that is so tasty and is much lower in sodium than even light soy sauce. This allows you to use more, increasing the flavor, without making an overly salty sauce.

The garlic, ginger, red pepper flake, and black pepper in this sauce make it a bit spicy, but the spice is just enough to excite your taste buds without being ‘hot’ and it is cut by the sweetness. In contrast to many Teriyaki-style sauces in the US, this recipe uses only 2 tbsp. of sugar. It is just sweet enough and having less sugar lends a more complexly flavored and bold sauce.

The addition of fish sauce and five spice (which is a mix of star anise, cloves, Chinese cinnamon, Szechuan peppercorns, and fennel seeds) make this recipe unique. Five spice has warm, licorice-y flavor, but since this recipe uses only 1/4 of a tsp. the five spice adds seasoning and depth to the sauce without dominating the flavors. Just half a tbsp. of fish sauce is added to up the umami ante – it is undetectable in the final sauce (do not worry about a fish-y taste!).

This bold Teriyaki sauce is so addicting and will make any dish you use it in really sing!

One thought on “Bold Teriyaki Sauce”